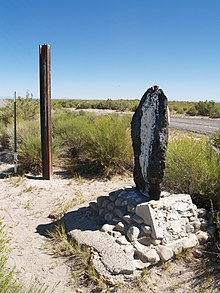 The Gunnison Massacre Site is significant in its ties to the history of exploration, railroad construction, Indian-white relations, and the Mormon experience in the West.  The massacre occurred on October 26, 1853.  Captain John W. Gunnison, leader of the 38th Parallel Railroad Survey, and seven others were killed by Indians of the Pahvant Tribe (Ute).  Killed with Gunnison were Richard H. Kern (topographer and artist), F. Creufeldt (botanist), William Potter, (a Mormon guide), Private Caulfield, Private Liptoote, Private Mehreens, and John Bellows (camp roustabout).  Four members of the survey party escaped.  The site of the massacre was added to the National Register of Historic Places in 1976.

A stone monument marks the spot where the massacre occurred. To get to it, travel west from Delta on Highway 50, and several miles past Hinckley to a road sign that marks the turn off. Go south about 1/2 mile to the marker. Because of vandalism, the plaque describing the event was moved to the Great Basin Museum in Delta.

Location:
Travel west from Delta on Highways 6&50 about 3 miles west of Hinckley. Turn south from Highway 6&50 at site sign and travel about 1/2 mile on well-maintained gravel road to site. Not recommended for winter or in rainy weather.